If you really want to supercharge your worm composting operation, now you can see exactly how the professionals do it, learn their methods & mimic their successes... 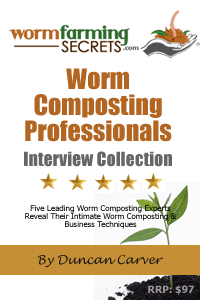 When you download the "Worm Composting Professionals Interview Collection" today, I’m also going to hook you up with one of the largest wholesale distributors of composting worms (and related products) in the USA & Canada! Order at wholesale prices – place your markup on the products – and take them down to your local garden market to turn a profit. Full details below...

For the past few months I've been out there in the trenches interviewing 5 of the worlds leading worm composting experts. I asked them all specifically to reveal their most intimate worm composting business operations & techniques – so all of my fellow worm composting comrades could follow along, learn their methods and mimic their successes...

Each professional was asked over 40 in-depth questions relating to 4 key areas of their worm composting business. However, before we get onto that, let's meet these professionals & find out exactly what they’re going to teach YOU. In no particular order of importance...

Jerry Gach has been raising worms for the past 7 years and his interest in worm composting began through a need to feed 50 hungry box turtles. After attending a local composting seminar that filled two classrooms of people interested in Worm Composting, Jerry soon realized there was a serious business opportunity in worms.

What started as a plan to raise African Nightcrawlers, evolved into a high volume worm business selling every type of commercial worm available. Jerry now manufacturers his own commercial flow through composting system, The Worm Inn, which is currently being used by the two major Vermiculture Research Facilities in the world (Ohio State University and North Carolina University), and will soon be sold via a licensing agreement in Europe.

Holding a major in Ecology and being a high school horticulture teacher, Angela’s passion for worm farming started about four years ago when she moved to a very environmentally friendly community called Raglan in the North Island of New Zealand.

Shortly after building her first of 4 worm farms for her school Angela became amazed with the amount of food the worms could process. She then tried selling some of the worms, and within hours she had her first success and sale.

That is where it all began and Angela has since progressed to selling different types of worm farms, and worm tea (leachate) in various volumes. Angela says her main motivation for this business is mostly helping New Zealand be more environmentally friendly.

If you’ve been a long time subscriber to our popular “Worm Farming Secrets” newsletter, you might remember Bentley Christie as our former lead newsletter researcher & author. Bentley was also a co-author to our best selling guide – “The Business & Biology of Raising Composting Worms” – which has literally sold thousands of copies since it’s first release.

What most people don’t know is that Bentley also runs a “real-world” worm composting business located in Ontario, Canada AND a global worm composting education business operated from redwormcomposting.com.

He has taught thousands of budding worm composters the fine art of composting with worms & is one of the most knowledgeable, friendly guys you’re going to meet.

Jay Myer of Soil Secret Inc. has been is business nine years and has 4-5 million employees (the worms) and three human employees. Jay averages 1000-1200 lb. of Soil Secret Earthworm Castings production a week.

Having started out just selling Soil Secret Earthworm Castings locally, Jay is now selling through sixty some garden centers and two distributors. In addition to the castings side of the business Jay does presentations to garden clubs, or to sales staff to help inform them of the benefits of Soil Secret Earthworm Castings. If your interest is in vermicompost / worm castings, Jay certainly knows his stuff.

Michael’s story is an interesting one as his primary business is The Strawberry Store, LLC. which he began after collecting varieties of gourmet strawberries over the past 20 years. Shortly after starting this business Mike become interested in vermicomposting and believes it has totally changed how he grows the seedlings and plants in his nursery.

If you want to learn more about the worm tea side of things that have been applied in a real world agriculture business Mike is the man.

As mentioned before, each of these professionals was asked over 40 in-depth questions relating to four key areas of their worm composting business.

As you read this now, imagine how helpful it would be if YOU knew the detailed answers to just a few of the questions below – and remember, these questions are just a small sample of what was asked and discussed during the interviews...

The Worm Composting Business In General....

The first area of our interview focus was related to our professionals "general" worm business practices. It includes detailed and thorough answers to questions such as…

What type of worm composting system would you recommend for a beginner that was looking to go to that next level and why?

How do you find customers for your products / services?

Assume you’re having a conversation with a person that has a basic worm composting system but would like to go to that next level and make a few hundred extra dollars each month from their hobby. What would be the first logical step for them to take? What would be the next?

How much should someone be prepared to invest in their hobby in the beginning to move to a thriving business? Is there a key amount that will make or break the opportunity? In what tools, equipment, training etc would that money be best invested?

If you had to start over again, but you were only able to use ONE form of marketing / advertising to generate customers, what would that be?

How are you making your money (i.e. what are you selling – please discuss ALL products / services you offer related to the business) and which area is most profitable for you?

What would you consider to be the single most important investment you ever made for your worm business?

Worm Castings & Vermicompost As A Product...

The second area of focus was related to the product specific subject of worm castings / vermicompost & includes detailed and thorough answers to questions such as...

How do you harvest your worm castings? Do you use any form of equipment? Can you recommend a low cost but efficient solution for people just starting out? What about a solution for separating worms from castings on a large scale?

What is the best place to focus on selling worm castings? The local market, local greenhouse, other etc?

What is the best way to package worm castings? How much should one include in a single "package", what type of packaging should be used and what do you do about labeling? Is it better to pack worm castings wet or dried or doesn't it matter?

In your opinion, if someone wanted to really focus on worm castings as their primary product, what would be the best overall worm composting system / setup to use to maximize production?

How do you determine worm cast pricing?

And of course, answers to many more “worm casting” related questions…

Composting Worms As A Product...

Our third area of focus was related to the subject of actual composting worms themselves as the product & includes detailed and thorough answers to questions such as..

How do you separate your worms from their bedding? Do you use any form of equipment?

How do you determine worm pricing?

Do you have any techniques to increase worm reproduction and maximize stock numbers?

If you do, how do you deal with sending live worms in the mail or over long distances?

Would you recommend someone focus on selling one type of composting worm or several and why? In your opinion what would be the best type to begin with?

And of course, answers to many more "composting worm" related questions…

Do you think it’s best to sell worms based on individual worm count, by total worm weight, or by worm weight including the bedding?

The biggest selling factor for live worms seems to be "large fat worms". Do you have any specific food formula you use to condition your worms for sale?

Worm Tea & Lechate As A Product...

Can you discuss the specific process you use for making worm tea in detail and provide suggestions for someone looking to get started?

How do you determine worm tea pricing?

How do you store and package (and source packaging for) your worm tea for sale? Do you have any techniques to improve shelf life?

What is the best place to focus on selling worm tea?

Do you have your worm tea tested to determine nutritional composition to include on labeling to help improve sales? If so how do you test it? If not do you think this is a good idea?

If someone wanted to really focus on producing and selling worm tea as their primary product, what would be the best advice you could give them?

What a fantastic bunch of information...

What a fantastic bunch of information! Much of it is above my level for sure, but it will be something to look forward to in the future. What a diverse business, it should never get boring no matter which specialty you go into. I only started last year with 2 pounds of European and 1 pound of red wigglers. I put them in four separate 4 gallon plastic buckets. I now have 100 buckets of mixed worms.

At the present time I don't care whether I sell the worms or the vermiculture. I am an avid gardener and fisherman and have 10 grand children that help me, at least with the fishing. Anyway, thank you for a great book and I will be interested in buying any future books.

"The Worm Composting Professionals Interview Collection" has been produced in digital (PDF) format, so it’s available for you to download to your computer and read right now, even if it’s 2 am in the morning. You will be able to download the book immediately after payment has been made...

Fully Protected by Our 100% Satisfaction-Guarantee.

If for any reason whatsoever you’re not totally convinced that this is one of the most insightful guides into the world of the worm composting business that you've ever read, simply drop me an email within the next 60 days & I’ll refund 100% of your purchase price. So you've got absolutely nothing to lose by downloading it now...